Specific to the Java implementation of Skyve, Skyve projects a number of Maven target utilities to assist developers. The Maven targets provided can be customised where required.

The maven targets are located in your project config/ folder. To run the target, right click the target and choose Run As.

Once the target has been run, it will be available in the Run menu.

mvn skyve:generateDomain Generate domain validates and compiles the metadata (XML files) in your project and checks that the application domain is in a valid state. Errors for the developer to fix are written to your console, and if generate is successful, the domain will be compiled to produce Java domain files and unit tests.

If no edit.xml is declared for a document, Skyve will create a scaffolded view automatically using the attributes specified in the document. When customising a view, it is useful to start from that scaffolded view and extend it.

The target will prompt for the customer, module and document parameters. If no document is specified, the target will generate edit views for all documents within the module.

This target will write a file within the views package of the module and document specified by the parameters called generatedEdit.xml . Once created, rename this file to edit.xml (or, if using this file as a view component, the name of the component).

mvn skyve:generateDefaultQueries Similar to having a scaffolded edit view for new documents, when documents are shown in a list from a menu or in a lookupDescription, the /default query/ will be used which defines which columns are shown. This maven command can write out all the default queries to a file in the project root so any queries can be tweaked and included in your module.xml.

The target will prompt for customer and module.

mvn skyve:script This will look for a file called skyve.md inside a script directory in your project root. Any modules and documents found inside this file will be generated and added to your project. For more user feedback, this can also be performed via the UI from admin -> Document Creator.

mvn clean compile war:exploded Depending on how you configure your Wildfly, if you are not publishing changes during development into wildfly/standalone/deployments, you can use this maven command to update your local /deployments/ directory with the compiled project. Your Wildfly deployment scanner can then be set to watch this location.

man compile war:exploded skyve:touch This refreshes your projects /deployments directory and creates a projectName.war.dodeploy file telling Wildfly to restart the module. This is used when there are any Java or module changes which are cannot be hot-reloaded.

To update your project with a specific Skyve version, you’ll need to pull/check-out the Skyve project (from https://github.com/skyvers/skyve.git) prior to the following steps, ensuring you pull the specific Skyve version you’re after. If in doubt, pull Skyve and check which version is retrieved. Releases are tagged, so it is typically safest to checkout the last tagged commit.

Warning: before continuing, make sure your project is under source control, and all files are committed locally. Upgrading a project can change lots of files, and will update your admin module and web resources. Any local changes you have made will be overwritten and need to be merged back in manually.

These instructions apply to projects created using the Skyve project creator. If you created your project manually, these steps may differ. 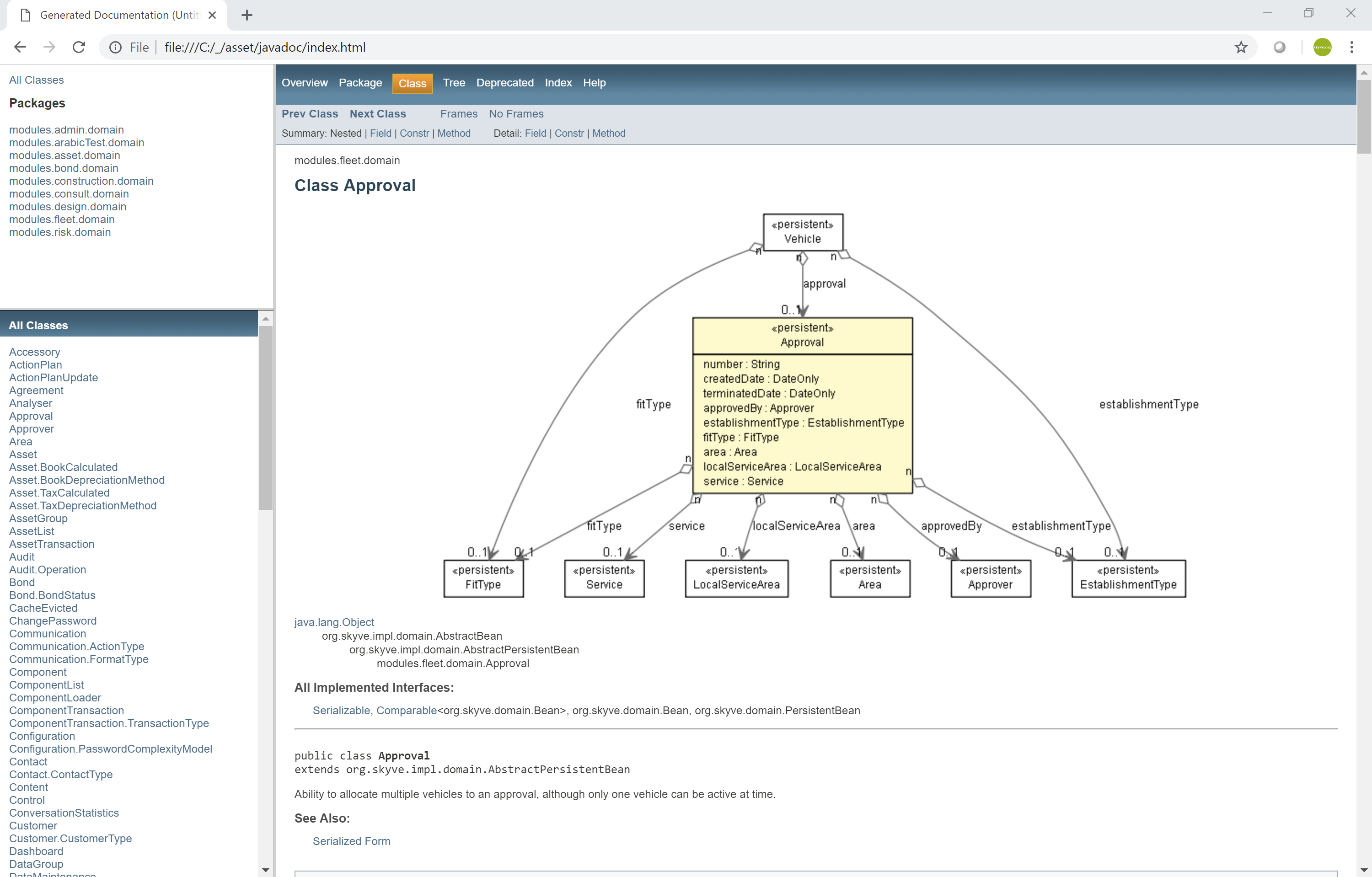 To ensure that graphviz can generate model graphs, ensure that ..\Graphviz\bin is in your environment path.

The javadoc utility includes a combination of the application metadata formatted and combined with the embedded documentation.

Skyve includes documentation attributes at every level of application metadata.

Users can include basic html-style documentation within the metadata documentation attributes. The utility assembles this html and combines it with self-describing metadata (like tool-tip definitions already embedded in the metadata), according to the concepts inherent in the platform.

The utility creates a full documentation set including: